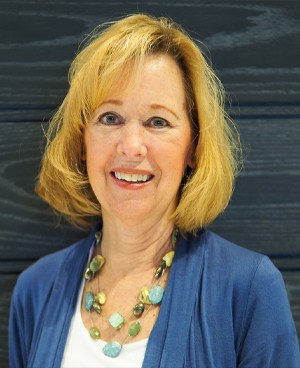 I was born and raised in Holland, Michigan on May 9, 1951, and given the name Crystal Jean Langejans. My friends called me Christy when I was little, and Chris when I was still little but older. I’m 5’2″ and Dutch people are usually tall, but I am not. I grew up in a nice town with great people and I own a pair of wooden shoes. After graduating from Holland Christian High School, I went off to the big city of Grand Rapids to pursue higher education at Calvin University with my BFFs.

After graduating with a degree in elementary education, I got married and moved to Ann Arbor, MI where my husband was going to school at U of M. The only teaching job I could get was at Little Angel’s Nursery School. This is not what I had in mind when I was studying calculus and chemistry, but I guess it was what God had in mind. I soon realized that teaching munchkins was my thing. So, I took some graduate courses in early childhood development at U of M, since it was practically in my backyard.

When my husband graduated, we moved to Grand Rapids. I got a job as teacher-director at Lollipop Preschool and taught for two more years. Then we had our first baby boy, and then we had another son. A few years later the boys got a sister. While I was raising our three little angels, I started writing some poems. I actually wrote my first poem when I was 10 years old, and my teacher Mrs. Beckman told me I was going to be a poet someday, so I guess that writing was always a part of me.

Then I got this offer to write lyrics for children’s piano music and I’ve written a zillion songs for piano lesson books. If you play the piano, you might see my name on some of the pages–especially the Piano Adventure books by Randy and Nancy Faber. 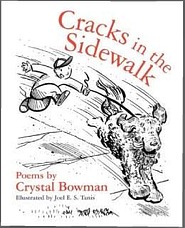 When our kids were in school, I taught poetry lessons in the schools and the kids wanted copies of my poems, so I made a book of funny poems. I did it myself and had 5000 copies of Cracks in the Sidewalk printed. That was expensive! But I sold them pretty fast and had 5000 more books printed, and I sold those too. Then I was talking with an editor at Zonderkidz, and he said they needed someone to develop a beginning reader series and asked if I had any experience with preschoolers. Hmm. Maybe that’s why God had me teach preschool way back then. I wrote a couple chapters and made up this kid named Jonathan James and five years later they published it, only the kid was a lop-eared rabbit. I wrote 8 books in the series. Then I wrote a kids’ poetry book for Zonderkidz called If Peas Could Taste Like Candy. It was a fun book and lasted for 10 years, but it’s now out of print so you can only get it on eBay for like $50, and I wouldn’t even pay that much for my own books, so I don’t expect people to buy it anymore. 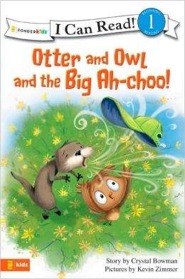 I wrote a picture book for the Holland, Michigan Tulip Time Festival. It’s called Windmills and Wooden Shoes because there is a real windmill in Holland and people wear wooden shoes with their Dutch costumes when they go to the parades. Joel Tanis painted awesome pictures for the book and if you live in Michigan, you might know who he is because he is famous. Joel also did the illustrations for a new edition of Cracks in the Sidewalk.

Then I started writing books for Baker, Eerdmans, David C. Cook, Tyndale, Focus on the Family, Standard, Thomas Nelson, Discovery House, Kregel, Waterbrook, and End Game press. It’s really fun to be writing so many books. I’ve actually written more than 100 books and sometimes I lose track of how many I’ve written.

I’ve also written books for Tyndale’s Little Blessings Series. The One Year Book of Devotions for Preschoolers has sold over 300,000 copies, and it’s cool to think about all those little kids learning about Jesus.

If you know about the Frog and Toad books or Little Bear, then you are familiar with the I Can Read! books by Harper Collins. Harper is the parent company for Zonderkidz. I rewrote some of my Jonathan James books, and they are now I Can Read! books, only the rabbit’s name is Jake because Harper said Jonathan James was too long. Also, I have a nephew from Ethiopia whose name is Jake, and so it’s cool to have books with his name on the cover!

I have some other I Can Read! books in a series called Otter and Owl. Boys will really like them, but girls will too. I have written lots more I Can Read! books, and most of them are Bible stories. I think it’s cool that as kids learn to read, they can also be learning about God.

Another book I wrote is called The House in the Middle of Town (Standard) and something really cool happened in July 2008. The Extreme Makeover Home Edition people were in Cincinnati which is where Standard is located. Standard gave away 1000 books to volunteers who worked on the house! 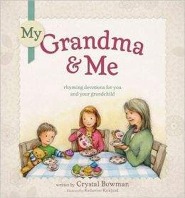 Another exciting thing is that I became a grandma! I wrote a book called My Grandma and Me, and it has some fun rhyming verses, Bible verses, prayers, and songs. It’s for grandmas to read to their grandkids. I wrote the book for Tyndale, and it won a big award. Since then, I have been blessed with seven more grandkids, so I’m getting lots of fun ideas from them. 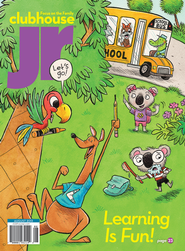 Have you ever heard of Clubhouse Jr. Magazine? Well, I write some of their stories and poems, and I love having what I write show up in the magazine. I also write their comic page call Friends Out Back. It’s about a Koala Bear family and their friends. I wrote another book called My Mama and Me. It’s a lot like My Grandma and Me, only it’s for moms to read to their kids. And the coolest thing is that I wrote it with my daughter, Teri McKinley. The book received the Logos Bookstore Award which is cool because the people who work at bookstores give the award. I’ve been on tons of radio programs and a few TV programs. I don’t get nervous for those because you can’t see all the people who are listening to you talk about yourself. I especially like radio shows because you can wear whatever you want since no one can see you.

I’ve written quite a few books of devotions, prayer books, and Bible storybooks. Teri McKinley and I wrote Our Daily Bread for Kids—365 Meaningful Moments with God. It was published by Discovery House in 2014, and it’s for kids 6-10. The devotions help kids know more about God and the Bible and has some fun facts on every page. Two years later we published Our Daily Bread for Preschoolers—90 Big Moments with God. Then we wrote some cute board books called Our Daily Bread for Little Hearts. We have six titles: A is for Ark, Adam and Eve’s 1-2-3s, First I Say a Prayer, This Is Christmas, This Is Easter, and God’s Bright and Beautiful Colors.

M is for Manger is another book that I wrote with Teri. It’s a rhyming alphabet book that tells the Christmas story in chronological order and it includes Bible verses on every page. People ask me what I did for the letter X and Z, and I tell them they must read the book to find out! 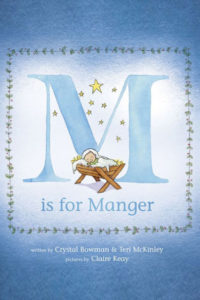 I Love You to the Stars—When Grandma Forgets, Love Remembers (Kregel) is a picture book I wrote to help kids understand what happens to older people when they get a disease called dementia. It’s sad when that happens, but the story helps kids understand how to keep loving that person even though things are different. 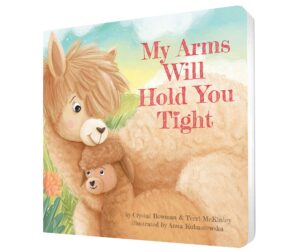 My Arms Will Hold You Tight (Tyndale) is probably the cutest book in the whole world! The illustrations of cuddly animals make you want to hug someone! It has won a bunch of awards, so I guess lots of people like it as much as I do.

Another new book is Who God Wants Me to Be (Waterbrook). I wrote it with my friend Michelle Lazurek, and it’s about girls who imagine what they will be when they grow up.  I have also written books for The Princess Parables series, Boz the Bear, and The Berenstain Bears. I am still writing and have some new books coming out in the next few years.

My books have won lots of awards, but it’s God who deserves the awards and not me. Some of my books have been translated into many different languages so they are all over the world, which I think is awesome since I don’t speak other languages, but my books do.

Thanks for being interested in my work. I love writing, and since I write books that help kids learn more about God, it all has a greater purpose!